The world records abound with a whole lot of outrageous and unbelievable feats from shocking human body features to incredible achievements in sports and amusement. And yes, even in Pinball history there are many world records set by avid players and fans.

Take a peek of the amazing feats that went down in pinball game history. Here’s a list featuring 8 World Guinness Records in Pinball and the game’s monumental “Firsts”.

The world record for the longest non-stop playing of Pinball was set by Wayne Johns of the UK which he finished in two days from October 22 to 23, 2016. On this non-stop pinball marathon, he earned a whopping high score of 396,278,400 points in “World Poker Tour” pinball machine. This feat in pinball history was set to raise funds for Prostate Cancer Awareness in the UK.

2. Most No. of People Playing Pinball Simultaneously

On January 17, 2015, first balls numbering 331 in all were launched simultaneously at the Museum Pinball in Banning, Calif. USA. This game participated by 331 players is the world record for the most people playing pinball all at the same time.

While there are already pinball games even in the 1800s, the first to be considered as a pinball machine was the Wiffle. And on May 24 & 26 1935, the first ever pinball tournament was held in Milwaukee Wisconsin, US, called the “Big Whiffle Tournament.” The pinball event made available 200 whiffle tables and attracted hundreds of contenders and viewers across the US. As an event for a cause, the money earned from the two-day tournament was given to the Badger State Advancement Association of the Blind.

There has never been a game banned for so long than the Pinball game. A number of cities in the United States banned the game of Pinball, believing that it corrupts the youth and the game is linked to criminality and funds mobsters. Thus as early as 1942, the game was banned in New York, Chicago, and Los Angeles. Other cities followed suit, until 1970 when most of the ban was lifted after the California court ruled that Pinball is not a game of chance but rather a game of skill.

All in all, there were 30 years in American History, from the 1940s to 1970s, when pinball game was prohibited. However, the record for the longest ban of Pinball was set by Oakland which only lifted the ban in 2014–which makes 80 years of no pinball in the city.

6. Best-Selling Pinball Machine of all Time

While the mid 70’s to early 80’s is widely considered as the golden years of Pinball, the best selling machine only came in 1992, the Bally’s Addams Family. It sold over 20,000 units worldwide and was the most unique and technologically advanced machine back then. It is created by legendary Pinball designer, Pat Lawlor who also designed the second best selling pinball machine, the Twilight Zone.

The most expensive pinball machine to date is Capcom’s Big Bang Bar worth $30,000. This machine that’s almost worth a car was first introduced to the public at the Pinball Expo Show in Chicago during the late 1990s. It is best known for its fluorescent artworks, hi-fi sound quality, and animation. The manufacturer, however, discontinued the manufacture and release of the machine. Only 14 Big Bang Bar came into the market, which makes this game a rare piece of gem for collectors.

8. The First Pinball Table with Flippers

The first models of Pinball machines are played not with a pair of flippers but by tilting and bumping the table which is the predecessor of the nudging skills of Pinball Wizards. It was only in 1947 that a pinball machine first used flippers. Humpty Dumpty by Gottlieb Company revolutionized the game by introducing flippers, three on each side. This, however, did not become popular.

The following year, in 1948, a pair of flippers at the bottom of the table made its debut in Genco’s Triple Action. The flippers in this game faced outwardly. And only in 1968 will the pinball community play the modern flipper design that all machines now have. 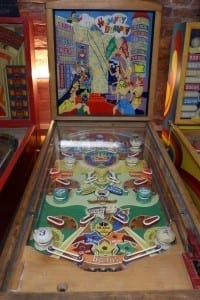 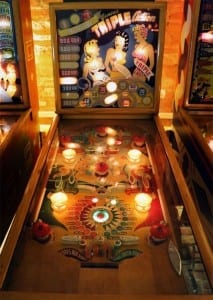 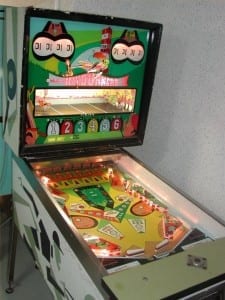 (Left: Humpty Dumpty, first pinball table to use flippers. Middle: Genco Triple Action, First Pinball to use only two flippers at the bottom of the table, but the flippers are positioned outwardly. Right: 1968: Hayburners II (by Williams, USA). The first modern flippers (3 inches in place of 2 inches) are introduced.

Did you find this article interesting? Let us know your thoughts by leaving a comment below.

Never miss a post by regularly visiting our blog.